Git in a nutshell

Git is a distributed version/source control system (VCS). Just like Subversion, Team Foundation Server, Mercurial; each has its pros and cons.

Why we need VCS? It simply because it allows developers to work simultaneously and maintains a history of every version.

What is Git branching model?

Let's imagine Git branching as a big tree with numerous branches and million of leaves.

Every trees have a root as base, develop slowly from a central branch to multiple supporting branches. Each branch has its own leaves.

Now, leaves, from different branches will do its own photosynthesis, bring back energy to the central branch and eventually all goes to the root.

Think of Git as a big tree,

when it applies to a project, the central repository will always holds two main branches, the master and develop branch with an infinite lifetime.

General, we always have remember the rule of thumb:

One Task = One Branch

Branch can be named various example:

It is also good to have Tagging for every releases for keeping track of delivered version.

Pull Request is a software development practice to maintain quality assurance. It is a practice whereby involved 2 developers and above. Developer added 1 or more reviewers do the job for his code.

The rule of thumb:

Reviewer should ensure the code is clean, straightforward, easy understandable because nobody want to maintain the 'shitty' code

There is no fixed strategy developer should follow and practice. Among developers themselves should have to adopt a branching pattern that is suitable for his project. A simplest version of Git model: 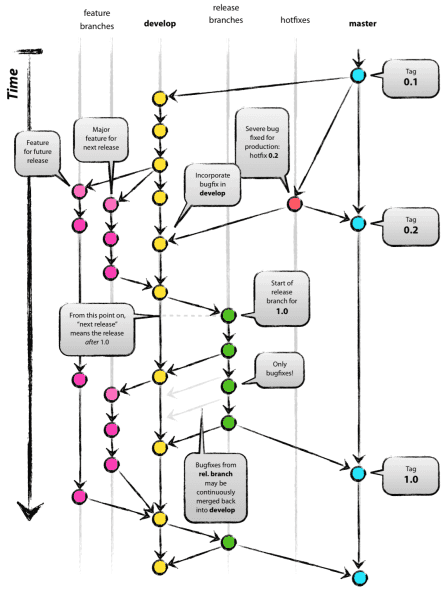